Caring for our bontebok 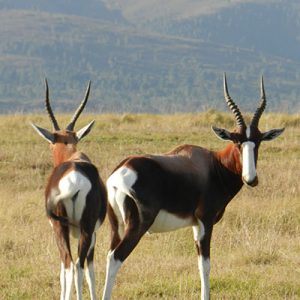 The Nuwejaars Wetland Special Management Area’s role includes to care for the animals living within the area’s 45,000 hectares. Bontebok – once critically endangered – are also found here. Protecting the animals includes moving them when they’re ill, so that we can actively monitor them. This bontebok was ill, but thanks to our local vet Marnus Smith and game capturer Chris van Schalkwyk, it was recently moved to the buffalo boma, where it could be treated more easily.

In the early 1900s, fewer than 20 bontebok remained in the world. Farmers in the Bredasdorp region, including ancestors of members of the Nuwejaars Wetland SMA established the Bontebok National Park in 1931, in order to save the animal from extinction. Today the SMA is home to around 100 bontebok, of the approximately 1500 mature individuals that occur in the natural distribution range. Bontebok are considered Near Threatened.

The main threat to the Bontebok today is the hybridisation with Blesbok, with Blesbok now occurring more frequently in the areas where Bontebok occurred naturally. Bontebok are assessed as pure through DNA sampling.