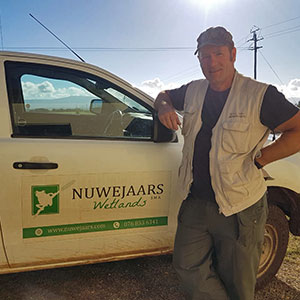 The Nuwejaars Wetlands SMA has a new project manager to help design and implement a range of exciting ventures.

Conservationist and a former game reserve warden, Ross Kettles has been appointed to the position. Ross’s role in the Nuwejaars SMA includes developing viable income-generating projects to support sustainability.

The projects are aimed at supporting the core function of the SMA: to protect and manage the special and unique biodiversity of the Nuwejaars Wetlands Ecosystem and surrounding buffer area.

Ross has a wealth of knowledge and experience in ecological management and developing and running tourism ventures.

He was previously the Warden of the Greater Makalali Private Game Reserve in Hoedspruit. Here he was tasked with working with landowners in the reserve to facilitate biological management, and to work with new landowners to expand the reserve. (Under his supervision, the reserve grew from 6,200 hectares to 27,500 hectares, and received its Private Nature Reserve status). He also coordinated anti-poaching activities, and helped establish a population of Black Rhino in the area.

Previously, he served as Managing Director of the Siyafunda Conservation Initiative and the Makalali Lodge, also in Hoedspruit. Ross has a Master’s degree in environmental development from the University of KwaZulu Natal.

In order to get to know Ross a little better, we asked him 5 questions:

We love our corner of the world – what makes the SMA region special to you?

Answer: This area supports either the biggest or the second biggest fresh water wetland system in South Africa (depending on which source you read), and it’s the southernmost wetland on the continent. What’s more, the SMA has the opportunity to develop and perfect a management formula that can be used by other SMA’s within Africa. The SMA concept is a relatively new management method, and the NWSMA is an acknowledged leader in this concept area.

What do you see as the most important issue in conservation today?

Answer: Sadly, I believe it’s habitat loss. We need to find ways to preserve biological services with an ever-growing human population with its resultant human footprint.

What do you believe makes our SMA model unique, and why?

Answer: As we lose biodiversity as a result of the ever-expanding human footprint, ways must be sought to combine conservation with food production, as we all need to eat. The Special Management Area model needs to be fine-tuned in order that it can be implemented in other areas. We are quite possibly the last generation that can make a positive difference. Failure to do so will result in an irrevocable downward spiral, the consequences of which are unthinkable.

Your favourite tipple: Wine, beer, whisky, brandy, or something else?