“Why it’s nice to work in nature” 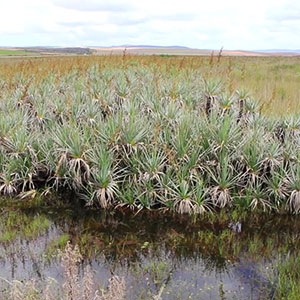 Gerty Holtzhausen from Bredasdorp has run her own small business for the past 14 years. Every day she and her team of 10 people take on the physically-tough task of removing invasive species from rivers and wetlands, from hand-pulling, to the chainsaws required to clear adult trees.

For the past two years, Gerty has plied her trade at the Nuwejaars Wetlands Special Management Area. With WWF South Africa support, these green jobs are helping us to expand and rehabilitate a Palmiet and Berzillia riparian wetland along the Nuwejaars River.

To improve the habitat to provide a home to resident and migratory birds species, including the Regionally Endangered African Marsh Harrier, Black Duck, Marsh Owl and Purple Heron.

They’ve already cleared 260 hectares of invasive plants – much of this densely infested by adult trees. And they’ve assisted to build a walkway over a wetland, which will ultimately lead to a new NWSMA bird hide for tourists to enjoy.

Recently, the Overberg District Municipality also partnered with the NWSMA. Through co-funding support, Gerty could add four more workers to her team (of six). She says she’s now providing these previously unemployed people with an income for the next three months.

For Gerty, this job provides financial security – for her and her team. She also believes that if you don’t love and appreciate nature, you shouldn’t be doing this job.

Here’s Gerty’s story, in her own words: